The Passion Economy: The New Rules for Thriving in the Twenty-First Century is an explanation of our current economy—its internal logic and the transformative hope it offers for millions of people to thrive as they never have before—by the brilliant creator of NPR’s Planet Money podcast and award-winning New Yorker staff writer, Adam Davidson. We spoke with him about what inspired him to write The Passion Economy, introducing his son to audiobooks and independent bookstores, and more. 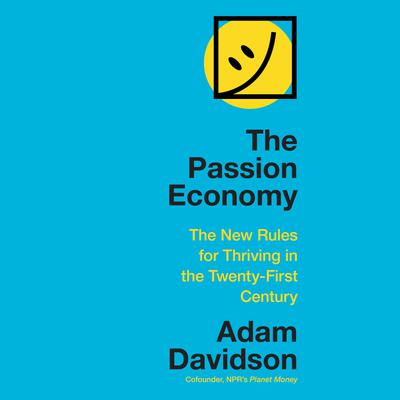 Contrary to what you may have heard, the middle class is not dying and robots are not stealing our jobs. In fact, writes Adam Davidson—one of our leading public voices on economic issues—the twenty-first-century economic paradigm offers new ways of making money, fresh paths toward professional fulfillment, and unprecedented opportunities for curious, ambitious individuals to combine the things they love with their careers. Drawing on the stories of average people doing exactly this—a dissatisfied accountant overturning his industry, a zealous father creating a better chocolate bar for his children, a family of craftsmen meeting the technological needs of Amish farmers—as well as the latest academic research, Davidson demonstrates how the twentieth-century economy of scale has given way in this century to an economy of passion. He makes clear, too, that though the adjustment has brought measures of dislocation, confusion, and even panic, these are most often the result of a lack of understanding. In The Passion Economy, he delineates the ground rules of the new economy, and armed with these, we begin to see how we can succeed in it according to its own terms—intimacy, insight, attention, automation, and, of course, passion. An indispensable road map and a refreshingly optimistic take on our economic future.

As an economics and business reporter for the past two decades, I spent a lot of time covering economic pain. The global economy has gone through several crises and has restructured the way people live and work.

Every now and then, I’d come across someone whose life was counter to the prevailing trends. These were people who were thriving, financially and personally, precisely because the economy had changed so thoroughly.

I learned that this was no mere accident. These people had figured something out that allowed them to do well when so many others were struggling. I decided to collect as many of these stories as I could and to understand what, precisely, they knew.

My goal was to create an audiobook that was fun to listen to, filled with compelling stories about remarkable folks. My hope is that people enjoy the stories so much that they barely realize that they are, also, learning a lot about how the economy works.

When I listened, it was the first time I was able to actually take in the book. I had spent so much time focused on each section, each chapter, that it was impossible to think of the book as a whole. It was great to just hear it as one, unified, thing.

I am an obsessive audiobook listener. I listen to dozens a year—several each month. My favorites tend to be history and business—I personally prefer to read fiction. My favorites are ones that I can listen to with my son, who is eight and very curious. We have listened to several of The Great Courses about the ancient world, particularly The History of Ancient Egypt and Ancient Mesopotamia. We’re moving on to learning about Ancient China now.

It is hard to convey how important they have been throughout my life. Many of my favorite memories as a child were of sitting in bookstores, reading. For years, I lived near two of the greatest independent bookstores in the world—57th Street Books and Powell’s—in Chicago. I can’t even guess how much time and money I spent there. I feel like half my brain is filled with things I learned from thumbing through those shelves and reading what I found.

Today, I live near powerHOUSE Books in Brooklyn, which is a small miracle. I love that I can introduce my son to the joys of a well-curated independent bookstore.