In this magical middle-grade debut novel from Adrianna Cuevas, The Total Eclipse of Nestor Lopez, a Cuban-American boy must use his secret ability to communicate with animals to save the inhabitants of his town when they are threatened by a tule vieja, a witch that transforms into animals. We spoke with author Adrianna Cuevas about her inspiration for the book, the audiobook’s narration, and more. 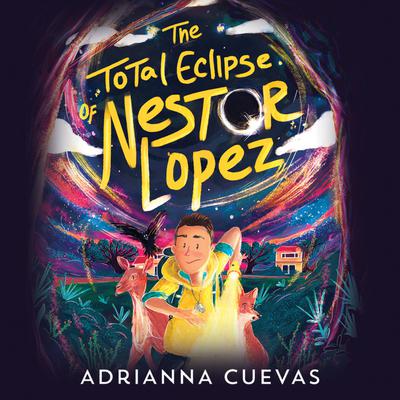 “A charming and vibrant debut fantasy.”

Nestor is a family story. The animal trivia and Nestor’s ability to communicate with animals stem from my son’s overwhelming interest in biology and ecology. Nestor’s relationship with his military father is based on what I experienced during the first four years of my marriage when my husband and I were separated due to his multiple deployments with the army. Most of all, it was important to me to show my son that Cuban-American kids—kids who feel vulnerable, and kids who feel out of place—can still be the hero of a story.

The narrator, Anthony Rey Perez, absolutely knocked out of the park everything I threw at him: voices for a snarky 12-year-old, a sarcastic raven, a devious witch, a quirky abuela, and a whole gaggle of snarky forest creatures. He did an amazing job!

I’ve only heard a sample of the narration but I loved it. It wasn’t only the narrator’s ability to embody so many different characters with only his voice, I was pleased with the pronunciation and cadence that he brought to my Cuban-American main character.

Honestly, I don’t listen to audiobooks. I have auditory processing issues which make it very difficult for me to follow a narration if there is no visual support. My mind wanders and I realize I’ve completely missed what was being said for the past twenty minutes! But as a former educator, I often recommended audiobooks to my students and they loved hearing their books come to life.

Growing up in Miami, family trips to our local bookstore were common. I’ve continued the tradition with my own family as we often frequent BookPeople, our incredible bookstore in Austin, Texas. My local chapter of the Society of Children’s Book Writers and Illustrators also meets at BookPeople so I can confidently say that my writing career began in an independent bookstore.