In the early evening of June 25, 1980 in Pocahontas County, West Virginia, two middle-class outsiders named Vicki Durian, 26, and Nancy Santomero, 19, were murdered in an isolated clearing. Now Emma Copley Eisenberg, who spent years living in Pocahontas, shows how this mysterious act of violence has loomed over all those affected for generations, shaping their fears, fates, and the stories they tell about themselves. 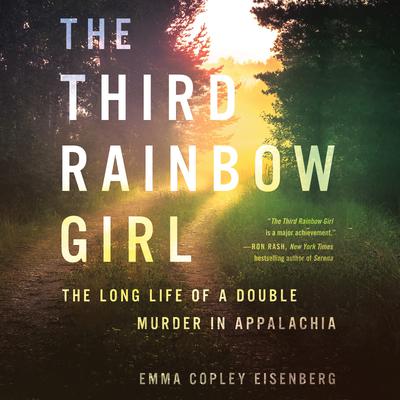 Emma Copley Eisenberg told us about how her own experiences in Pocahontas County came through as she wrote, her experience narrating the audiobook, and some of her own favorite listens.

The time that I spent in Pocahontas County, West Virginia stayed with me and nagged at me for years after I moved elsewhere, and I had heard about the murders while I lived there but didn’t dig too deeply into them at first. I was in graduate school for fiction writing in Charlottesville, VA and was trying to write some of the material that would become the book as fiction, but it wasn’t working. Then several events happened in quick succession–the Rolling Stone Rape on Campus article was published about UVA: two young women, one white, one black and trans, went missing from the area and the forces that would become pro-Trump white supremacists started rearing their heads all over town. I realized I wanted to participate in the conversation occurring around these issues so I started writing some small journalism pieces.

Opening the door to nonfiction turned out to be the way into writing this book more honestly and ethically, as you can make clear in nonfiction your own background and what you are bringing to telling a particular story. I started reading some of the coverage about the 1980 Rainbow Murders that was available online, and immediately it became clear to me that the story that existed was deeply wrong and portrayed a stereotyped image of this place I had known so well and of the kind of women who might come there as travelers. It was an impulse to contribute, to tell the story hopefully better than it had been told before. And then my own personal experiences came knocking again and began to rhyme with the things I was learning about the murders, so I decided to include some pieces of insight into the contemporary community I gained while living there as well.

The book opens with a section called “True Things” which is essentially a list of everything in this complicated case and complicated history of a community and complicated story of myself that I knew to be absolutely true. It also lays out the essential features of the case and what happened right up front as my book is really less about “who did it” than “what does it all mean?”

I was lucky enough to get to narrate the audiobook myself! As someone who performs interviews and journalistic work, I’ve long hated listening to myself ask rambling questions on tape, but it was a lovely surprise to hear that I sound like a real and cogent person. I didn’t do any “voices” or accents of particular characters but did try to lend each particular person their own features and rhythms and energies of speaking.

Yes!!! As I talk about in the book, I’m a New York City kid who learned to drive late in life, so driving long distances still often feels like free magic to me, and I often take a good audiobook or two along. Recently, loved Ruth Reichl’s audio rendition of her book Save Me the Plums and Jia Tolentino’s Trick Mirror.

I am a bookseller alum of People’s Books & Culture (formerly Penn Book Center) in Philadelphia, where I spent several formative creative and professional years and where I met the friend with whom I went on to start Blue Stoop, a center for literary life in culture in Philadelphia. Indie bookstores are life to me–they are crucial third place spaces, spaces that are not our homes or our jobs where we can spend time in the world with strangers and community members and get exposed to ideas we crucially need. I’m thrilled that indies are having such a needed resurgence of life and support in Philadelphia and beyond.

Such a fan of Libro.fm, I recommend it to everyone! Thank you for all the amazing work you do.