by Danny Caine on April 8, 2021 in Author Profile, Resources

Danny Caine, owner of Raven Book Store in Lawrence, Kansas, compiled his thoughts about fighting Amazon into How to Resist Amazon and Why: The Fight for Local Economics, Data Privacy, Fair Labor, Independent Bookstores, and a People-Powered Future. This zine-turned-book is now available in audiobook form, published by Libro.fm Co-Founder and CEO Mark Pearson’s publishing company, Pear Press. It is not exclusive to Libro.fm and will be available from other audiobook retailers and via libraries. 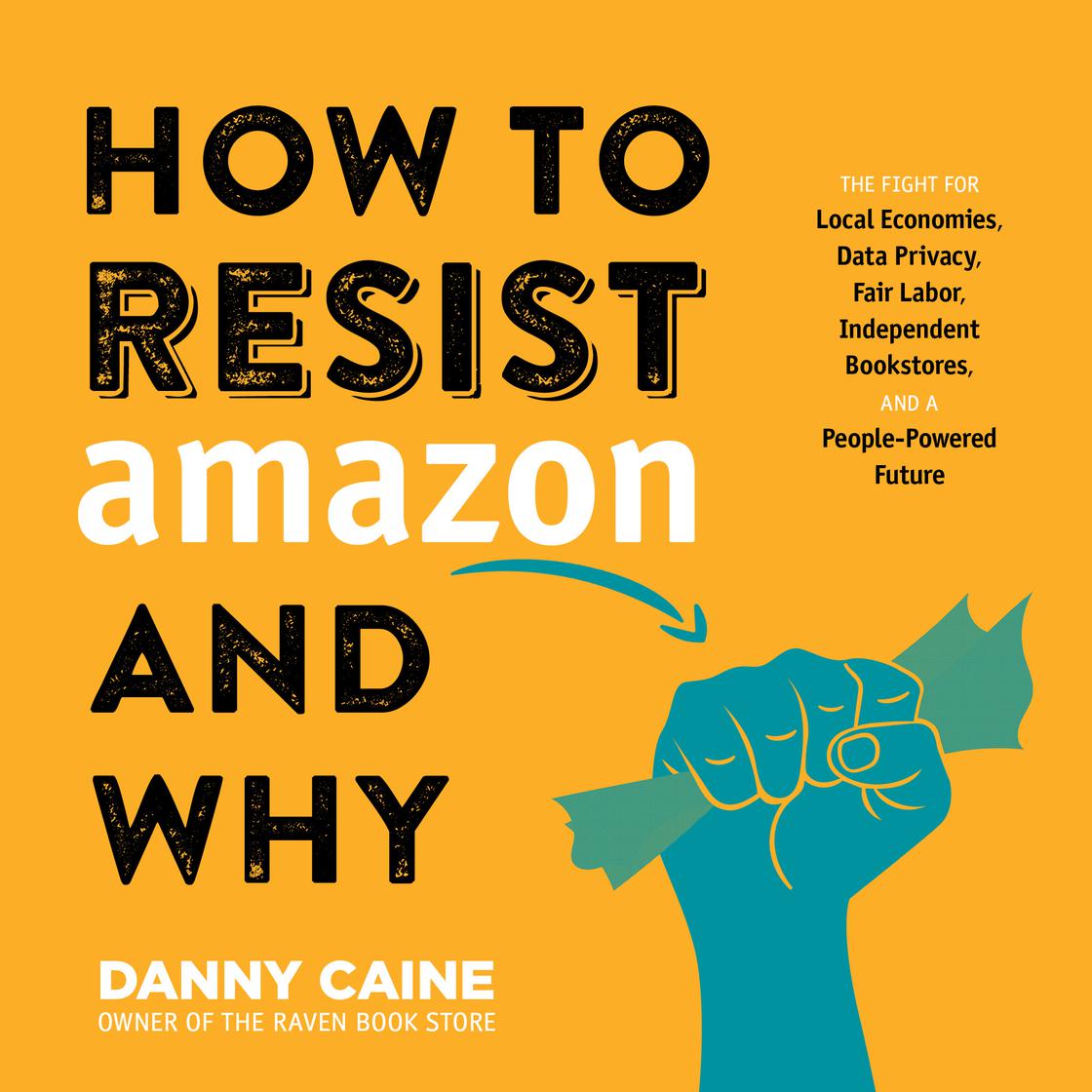 How to Resist Amazon and Why

By Danny Caine • Narrated by the author

Read on for a truncated excerpt from How to Resist Amazon and Why:

While purchasing a Margaret Atwood book from an independent bookstore instead of Amazon won’t make much of a difference for Amazon, it could be the difference between a profitable day and an unprofitable day for the indie bookstore. If you’re discouraged by how massive and impossible to avoid Amazon is, think instead of how to support your local small businesses in the face of Amazon’s dominance. Gestures that feel small compared to Amazon’s might will be huge for us. Don’t vote against them, vote for small businesses.

Here are 7 ways you can resist Amazon today:

The most important way to resist Amazon is to take the money you would’ve spent in Bezos’s empire and spend it instead at local, independently-owned small businesses. This has a tremendous effect on those businesses and your communities. Somewhere between 50 and 75 percent of money spent at local small businesses stays in your community, and the percentage for Amazon purchases can be much, much lower—sometimes as low as 0. But again, this is about more than money. A robust network of creative, responsive, community-oriented small businesses is anathema to Amazon’s view of the world; in fact, it’s the opposite of Amazon’s global conquest.

2. Cancel your Prime subscription, or even better, your Amazon account.

Amazon Prime makes it easier for you to give money and data to Amazon. The free 1-day shipping is a tremendous incentive for people to click the purchase button. It’s so tremendous that Amazon almost certainly loses money on many of these transactions. But what it loses in shipping costs it gains in data: Prime members not only share their purchasing, browsing, listening, and streaming data with the world’s most valuable company, but they also pay to do it.

Even without a Prime account, Amazon can still mine your data, as long as you have an account that you use to make purchases. No account means no products and, more importantly, no data. Amazon doesn’t want you to exist outside of their data-sucking system, so they’ve made deleting your account a multiple-hoops-to-jump-through process. Reaching an actual human is necessary, and reaching a human at Amazon is notoriously difficult.

To cancel your Amazon account, call (888) 280-4331 or use Amazon online chat. They’ll probably try to make you rethink your decision. They probably won’t make it easy. But remember, when they say their focus is “customer obsession,” it’s not obsession over your well-being, it’s obsession over how to use your data to increase their profits.

Amazon has an ever-growing portfolio of subsidiaries and acquisitions. To resist Amazon, resist spending money at these Amazon-controlled or -owned companies as well:

In terms of streaming entertainment, things are a bit more complicated. Netflix is a competitor to Amazon Prime but relies on Amazon’s AWS to manage its tremendous traffic. Disney Plus is also an alternative, but many may feel the same way about Disney that I feel about Amazon.

Consider your public library; many public libraries provide streaming alternatives for TV, movies, ebooks, and audiobooks for card members. I’ve been using Kanopy and Hoopla, both of which are free with my library card. Public libraries are one of the last great anti-capitalist spaces. To really resist Amazon and what they represent, form a good and loyal relationship with your public library.

5. You don’t have to plug your house into Amazon’s privacy-invading security network.

I’ve (hopefully) made the case that what Amazon wants most from you is your data. You are not their customer; you are their product. Much of this data comes from tracking browsing and purchasing habits of shoppers, which you can avoid by resisting shopping on Amazon. But even more of this data comes from people who voluntarily pay to place data-collecting devices inside their homes. They do this by purchasing Alexa-enabled devices and Ring security doorbells. One of the most important ways we can resist Amazon is by keeping them out of our homes.

When you spend money on something, the transaction is about more than you exchanging your money for some goods or service. That money is also a de facto endorsement of the business you’re giving it to. By giving money to a business, like it or not, you’re telling that business that you approve of the way they do things. One way to resist Amazon—other than, of course, not buying things from them—is to instead give money to businesses whose practices are better than Amazon.

A bit of research can help you find businesses with unionized workers, businesses with high wages, and businesses who work to reduce their impact on the environment. Traditional coalition-building and organizing against Amazon has ramped up in recent years, too. Athena is a coalition spearheaded by the Institute for Local Self Reliance aiming to curb Amazon’s power and abuses. You don’t even need to go to a meeting; even following groups like Athena on social media, or signing up for their email lists is a small step towards resisting Amazon.

7. Dream of a level playing field.

Learn more about how you can resist Amazon in your day-to-day life with Danny Caine’s How to Resist Amazon and Why.

Danny Caine is the author of the poetry collections Continental Breakfast, El Dorado Freddy's, and Flavortown, plus the book How to Resist Amazon and Why. His writing has appeared in HAD, Barrelhouse, DIAGRAM, Lithub, and other places. In 2019, the Midwest Independent Booksellers Association awarded him the Midwest Bookseller of the Year award. He lives in Lawrence, Kansas where he owns the Raven Book Store. More at dannycaine.com.